Tweed Courthouse at 52 Chamber Street in New York City may be recognizable as it appeared in movies such as The Verdict, Kramer versus Kramer, and Gangs of New York, but this building now the home for the New York Department of Education began in infamy because of the shady dealings of William ‘Boss’ Tweed. (Image courtesy of The Library of Congress.) 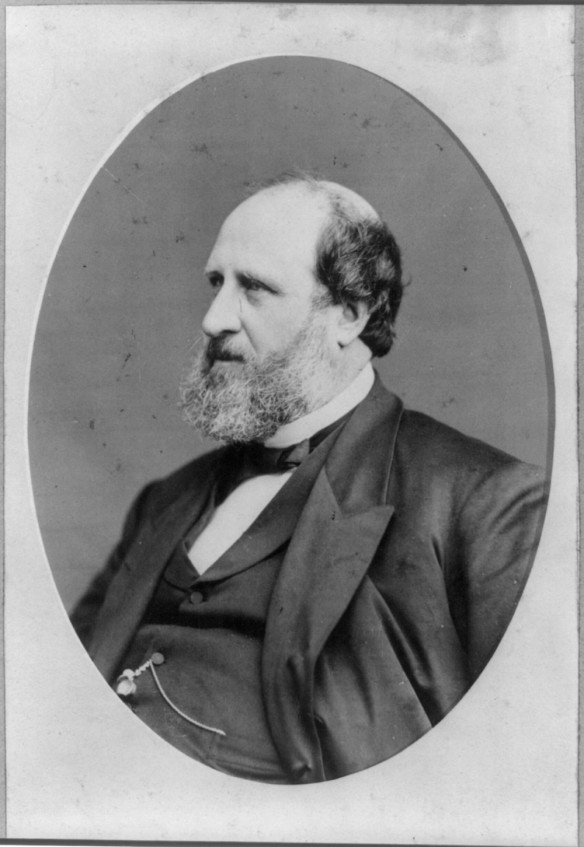 Tweed rose to power while overseeing one of the poorest neighborhoods in the city, the Seventh Ward.  He setup programs to aid the poor Irish immigrant population to bribe them for their votes.  Then as a member of the democratic political machine, the Tammany Society and as the Commissioner of Public Works, Tweed set in motion various corrupt business dealings.  The courthouse would be his last.  He used the construction to embezzle what today would be millions of dollars. (Image courtesy of The Library of Congress.)

Cartoons by Thomas Nash of Harper’s Weekly and stories by The New York Times brought about Tweed’s downfall.  Ironically he would be tried and convicted in his own courthouse.  Although convicted of 204 counts, a higher court reduced his jail time from 12 years to 1 year.  However, New York State filed a civil suit to recoup some of the stolen funds, and Tweed was rearrested when he couldn’t pay up.  While on a home visit, he escaped and worked as a seaman on a Spanish ship until someone recognized him, and  he was turned over to U.S. authorities. (Image courtesy of The Library of Congress.)

He died in the Ludlow Street Jail and still visits his courthouse.  Some of the early accounts of Tweed’s activities come from an article first published in the Ohio State Journal in 1911, recounting George F. Lyon’s experiences while serving as Jury Clerk in the Tweed Courthouse.  Lyon stated that while waiting in a vacant courtroom for a jury to adjourn, he felt a presence in the room and saw the shadowy figure of a man cross from a door on the right side of the room to the left.  (Image courtesy of The Library of Congress.)

Lyon also told how one morning, he over heard the Justice who had officiated Tweed’s trial, Noah Davis, point out a crack in courtroom’s Northeast window.  He said and everyone in attendance agreed that the crack, which had occurred some time during the night created a perfect profile of Boss Tweed.  (Image courtesy of The Library of Congress.) 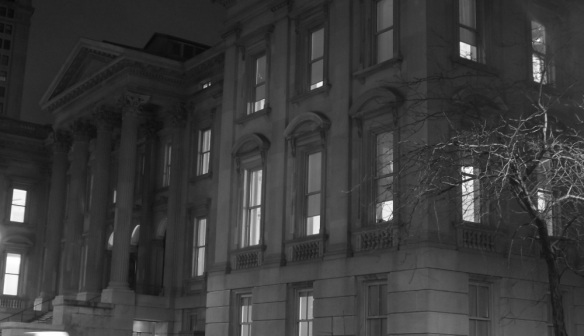 Nighttime seems to be the time for paranormal activity. During Lyon’s tenure at the courthouse, he learned that the janitor found the night watchman, Larry O’Hara, on the Chambers side-portico one cold, stormy night.  O’Hara refused to go inside the building even if it meant his job.  He claimed that he heard sounds and saw things moving about the dimly-lit corridors.  A few months later, the janitor discovered O’Hara’s replacement, John Riordan, on the steps outside one night.  When asked if he would go in, Riordan replied, “Begora, but O’hara was right; the damned place is haunted!”

I haven’t heard of any recent accounts of activity in the building, but apparently paranormal events spike with news reports of political corruption.