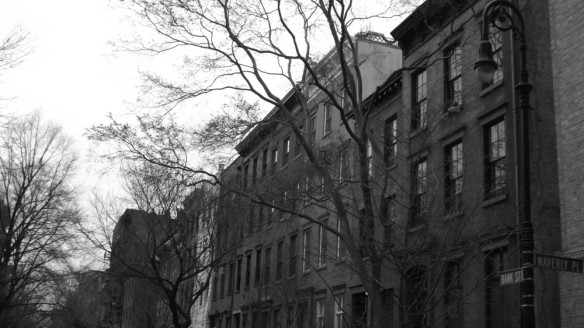 Bucolic Bank Street in the neighborhood of Greenwich Village in New York City features both stories of ghosts and murderers.  This week’s longer post focuses on one of the most notorious serial killers from the 1960s who lived on the quiet street. On June 14, 1962, Anna E. Slesers became the first of 13 murder victims attributed to one killer that the press dubbed The Boston Strangler.

In March of 1965, Albert DeSalvo confessed to be the Boston Strangler. However DeSalvo never stood trial for a single murder because the authorities did not have enough physical evidence to try him.  When DeSalvo confessed, he was facing a life sentence for crimes called the Greenman Molestations in Connecticut, and he had been heard saying that he hoped to make money from his notoriety.  In the 1960s any money paid to a murderer for interviews and book deals could be kept, and DeSalvo had a wife and children to support.

In November 1973, DeSalvo called the original psychiatrist that had interviewed him when he confessed, Dr. Ames Robey, who had always doubted DeSalvo’s claims.  DeSalvo asked the psychiatrist to come the prison right away and bring a reporter because he wanted to tell what really went on with the Boston Stranglings.   Dr. Robey agreed, but when he and the reporter arrived at the jail the next morning on November 26, 1973, he learned that someone stabbed Albert to death during the night.

What was DeSalvo going to say?  We’ll never know, but doubts continue to be raised over whether or not DeSalvo was the strangler. Recent DNA testing between him and one of the victims did not prove a match.  A theory suggests that one man committed the first six murders, which occurred between June 14th and August 30th, 1962, and that the next seven slayings were copycat crimes.  The modus operandi of the murders changed: The first six victims were all over the age of 50 while nearly all of the next seven victims were under the age of 30, and elements at the later crime scenes differed as well.

On May 30th, 1963, just steps from Times Square (pictured here months before) at the beautiful Woodstock Hotel, a maid discovered Zenovia Clegg, age 62, dead.  She had been strangled with her own scarf, her body was molested, and her room ransacked.  Using matchbooks they found in her room, police determined she had dined alone at a restaurant in Greenwich Village earlier in the evening.  Afterward witnesses saw her conversing with a tall, thin young man who got in a taxicab with her.

Using a new technique for rendering witness description composites, the police distributed the above sketch, which led to the apprehension of Charles E. Terry.  Terry left Maine in 1961 after serving time for the assault of a 50-year-old woman.  Although a suspect in the strangulation murder of Shirley Coulin in Brunswick, Maine, Terry moved to Boston and lived there until August 30, 1962. On that day, the same day that the sixth Boston Strangler murder occurred, he relocated to a house on Bank Street in Greenwich Village in New York City.

Thomas Cavanagh, the detective that inspired the television show Kojak (played by Telly Savalas above) elicited from Terry a solid confession of Clegg’s murder.  After reviewing all of the evidence from the Times Square hotel murder, Cavanagh reviewed Terry’s background and compared it to the open murder cases in Boston, and he became convinced he had the Boston Strangler in custody.  In fact, Lieutenant John J. Donovan of Boston traveled to New York City, but Terry refused to talk with him so the Lieutenant returned to Boston where the world would later turn its attention to Albert DeSalvo.  Terry died in prison in 1981, but according to an Associated Press story by Dan Sewell in 1993, Detective Cavanagh never forgot the case.  In fact Cavanagh gathered fellow retired detectives together to research the murders.  They confirmed that Terry’s New York murder resembled the first six Boston murders in that the victims were all strangled with a ligature tied into an elaborate bow.  They were all over the age of 50, their bodies staged and violated in a macabre fashion, and the crime scenes were ransacked but nothing was taken. Cavanagh experienced much resistance from the Boston police when he tried to resolve the cases, and he died on August 2, 1996 without proving his assertions, but I believe he discovered the true identity of the Boston Strangler.

1 thought on “The Real Boston Strangler From Bank Street, NY”